Bartonella is a gram negative intracellular bacterium has an unusual ability to hide from your immune system.  The fact that it’s gram negative means it has a cell wall to protect it.  The second fact is that it’s intracellular, so it likes to hide in your cells.  Bartonella produces toxic surface chemicals called lipopolysaccharides (LPS), which turn off the immune and inflammatory systems in your body.  This immune deactivation leaves you with diminished defenses. 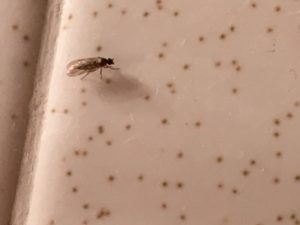 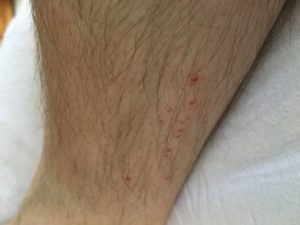 “Of the approximately 60 million pet cats in the United States, at least 20% are infected with Bartonella.” “Exposure to fleas or flea feces is the most important factor in transmission of the disease to cats,” says Dr. Mike Stone, board certified internist at Tufts University.

Fatigue, weakness, headaches, dizziness, irritability, aggression, muscle pain, joint pain, nerve pain, back pain, fever, chills, heart palpations and a host of skin rashes (papules, hives, stretch marks, and linear skin rashes that suddenly appear for no apparent reason).  These findings baffle most mainstream doctors.  The key here is  when the rashes appear (or get worse) Bartonella is most active.  Rashes or linear skin markings may be associated with other symptoms such as chills at night, burning feet or worsening joint pain; or no symptoms at all.

Bartonella is very tough on the brain because it can hide in the red blood cells and cross the blood-brain barrier.  It can be at the root of some difficult to treat psychiatric symptoms or can worsen them.

Approximately 12 species of Bartonella can infect humans and animals (Clin Infect Dis. (2001) 33 (6): 772-779. doi: 10.1086/322614) .  Most labs only test for two species (B. henselae and B. Quintana).  B. henselae is the notorious cat-scratch-fever bacterium and B. Quintana is notorious for trench fever.  If you’re a traveler and visited the Andes Mountains of Peru, there’s a species of bartonella called B. bacilliformis which is primarily transmitted by the sand fly and causes Carrion’s disease.  This is why a good history and clinical findings are so important.

Bartonella is commonly found with other infections such as Borrelia burgdorferi (Lyme disease) and is often referred to as a co-infection.  What most people don’t know is that Bartonella actually suppresses Lyme disease and becomes the primary infection.

Bartonella can enter and harm every organ system in the body by way of its attachment or infiltration of the red blood cell, and it can cause multiple illnesses throughout the body.  These stealth pathogens can also adhere to your blood vessel walls and cause vascular problems.

There are 2,000 published papers on Bartonella.  Unfortunately most doctors are too busy keeping up with their practices and don’t have the time to research this obscure stealth infection.  People continue to suffer with Bart because of misdiagnosis and practitioner ignorance only to be referred out to specialists with no solid answers.  Most people who are infected become discouraged.  They usually seek out their own doctors through research and support groups.

The truth is most doctors aren’t very familiar with Bartonella.  Aside from prescribing antibiotics; they don’t really know what to do with their patients after that.  Patients who are infected usually go years without proper post treatment support and their health slowly starts to decline.  Many of these patients are labeled with chronic Lyme, chronic fatigue or fibromyalgia and are living with debilitating symptoms.

How to identify Bartonella

Your history is a very good start.  Avid campers, hikers, beach goers, and cat owners are most at risk.  History of a tick bite with or without rash is also a good indicator. Any unusual rash or small open wound on your skin that you can’t account for is a good indicator.  Also, a rash that appeared followed by the chills or spontaneous chills at night without a rash is another sign.

Although considered a stealth infection and intelligently evading the immune system, Bartonella is not that smart.  It is one of the few pathogens that leaves clues (marks on your body).

Although testing may not be as accurate as we’d like, there are some basic tests that may show present infection.  First, start out with the typical antibody testing including IgG, IgM as well as PCR testing.  These tests can be quite valuable if they show up positive.  Further testing can also be of value if the preceding tests are negative.   For indirect indicator purposes; VEGF, TNF-alpha, IL-1B, EBV levels, C3a, C4a and LPS can be helpful.

Even if all the testing comes back negative and you still have symptoms associated with marks on your body (papules, hives, stretch marks, small linear open wounds and skin rashes that suddenly appear for no apparent reason) there is a strong suggestion that you may be infected with Bartonella.

“When you master the basics you rarely need to look elsewhere.”

The antibiotics listed above have their purpose and are a good first-line attempt to get this disease under control.  Some people respond well but others may still have post treatment health issues.  Natural treatment options can be used as a standalone therapy or can be used alongside or after antibiotic treatment.

Once a person is symptomatically cleared they will need supporative therapy for a long time (1-2 years). Sometimes clearing one infection can bring out another hidden infection.  This is because Bartonella suppresses other infections.

There is much more detail than what I have posted here.  It’s taken me years of study to understand the exact mechanisms of this pathogen.   For those who are suffering from Bartonella and are still experiencing declining health, don’t hesitate to contact me for a case review; call today 401.942.6967  case review information

Image courtesy of cuteimage at FreeDigitalPhotos.net